By：麦迪逊邦
2011-07-15 13:06:41
0 0
Shanghai– TBWA\Shanghai, the lead agency for Pernod Ricard China’s ABSOLUT VODKA brand, has launched an interactive ‘ABSOLUT BLANK’ campaign as a part of its global platform, ‘A Creative Visionary’. TBWA’s creative strategy for the ABSOLUT BLANK campaign began with the idea “it all starts with an ABSOLUT BLANK.” The global campaign, originally created by ABSOLUT in collaboration with TBWA\Chiat\Day New York, aims to encourage all the artists and ABSOLUT fans to fill in the blank, make the ordinary exceptional and therefore the world more vibrant. ABSOLUT, the leading international premium vodka brand, has a long-standing and fruitful relationship with the creative art world. Challenging conventions through creative collaborations with visionary artists such as Andy Warhol, Keith Haring, Damien Hirst, and most recently Ellen von Unwerth and Spike Jonze, has always been a part of the rich creative legacy of ABSOLUT. Now the brand continues this tradition with a new generation of artists, and leverages its iconic bottle shape to serve as a catalyst for creativity.  This is the ABSOLUT BLANK campaign. In China, TBWA\Shanghai and ABSOLUT collaborated with rising Chinese visual artist Lu Xinjian and musician/producer Lou Nanli (known as B6) to develop locally relevant, creative images of ABSOLUT that would resonate well with Chinese consumers. 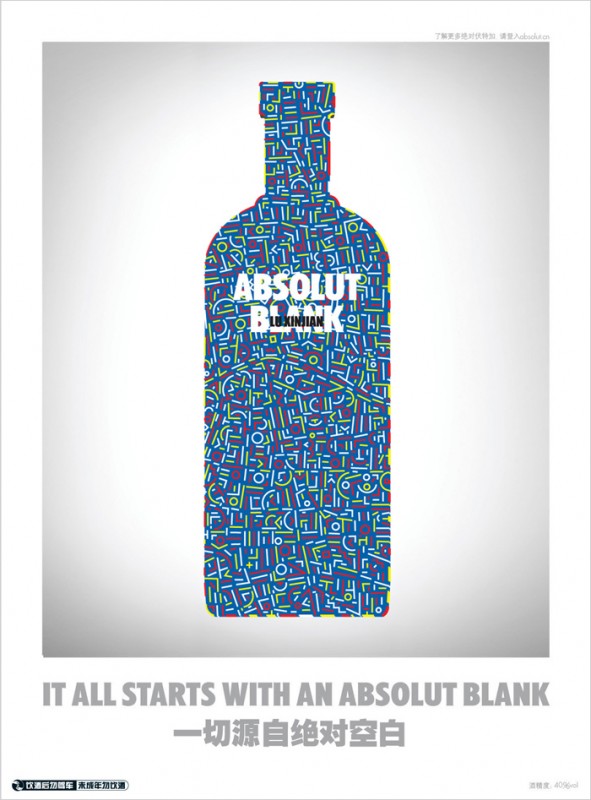 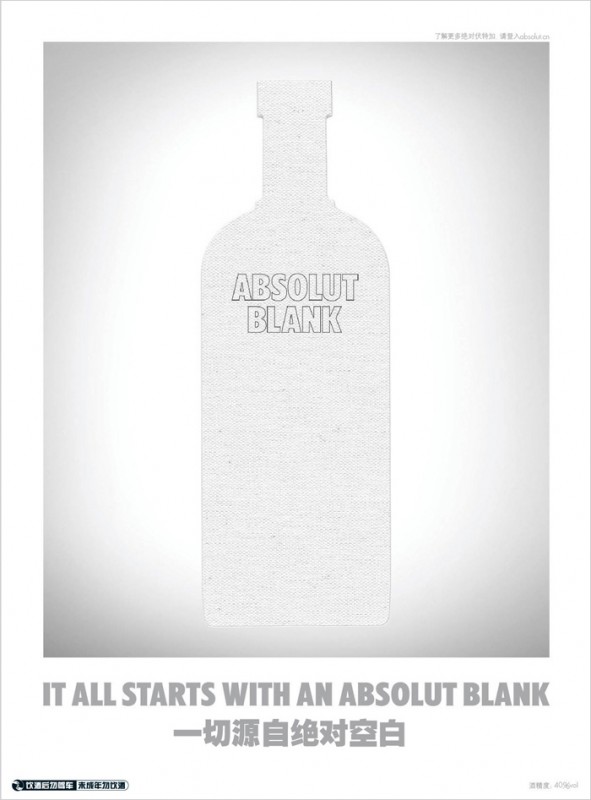 Lu Xinjian’s and B6’s creative works joined 19 additional original works of art selected from ABSOLUT Art Collection in Shanghai. All of the artwork will appear at Longmen Art Projects (http://longmenartprojects.com/) in Shanghai from July 14 to 31 as part of the ‘ABSOLUT BLANK’ campaign created by TBWA. Lu’s created a 3D installation by reinterpreting different elements found on maps. He made his own visual definition of the city and brought his ‘city DNA’ vision to life as a part of the ABSOLUT BLANK space – a unique way of filling in the blank canvas of the city. Lu’s installation is accompanied by the experimental music of B6 – sounds recorded on the streets of Shanghai and incorporated into the artist’s experimental ambient arrangement. Bringing Disruption and Media Arts to the creative community in China, TBWA invited more artists to contribute to the project over the two weeks of the ABSOLUT BLANK space. A number of ABSOLUT’s key opinion leaders were asked to ‘fill in the blanks’ and create artwork using the ABSOLUT BLANK bottle as a canvas. Contributors can participate live at the gallery space, or paint in the privacy of their homes or studios with the process displayed live on Douban via webcam: http://www.douban.com/minisite/absolut/. The two-week exhibition will also feature a number of workshops and parties to engage the creative community and ABSOLUT fans in Shanghai. “TBWA has positioned ABSOLUT as the driver of contemporary Chinese creativity by collaborating with Chinese visionaries and sparking conversations amongst ABSOLUT’s existing communities,” said Ian Thubron, President of TBWA\Greater China. TBWA\Shanghai represents an additional seven Pernod Ricard China brands: Ballantine’s, The Glenlivet, Royal Salute, Helan Mountain, Martell, TCX and Purfeel 21.
Tags： TBWA